Your BPM project could be a global winner; you gain international recognitionas an industry innovator.

Winners and finalists of the prestigious annual BPM and Workflow Awards have become sought-after industry speakers and their case studies have appeared in multiple publications. You and your company deserve recognition forsuccessfully using BPMto gain competitive advantage within your industry.

Winners and finalists receive additional recognition by having their case studies published in the annual volume of Excellence in Practice (see discount offer below*).

Submission information is here: Global Awards for in BPM & Workflow Awards 2008 for innovation and excellence in BPM & workflow implementations.

Remember - the awards are to user organizations whose case studies demonstrate excellence in Business Process Management and workflow. Particular attention is paid to implementations that support processes extending beyond the corporate boundaries to support customers, suppliers, trading partners etc. 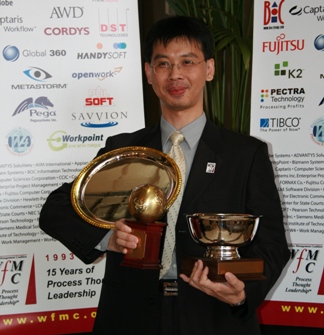 There are five regions. Each region receives one Gold and one Silver Award, but the judges reserve the right to withhold naming regional gold or silver winners if submissions are not of sufficiently high standard.

For questions relating directly to the Awards, please email awards08@futstrat.com

* PS: Save 30% on your purchase of the new DIGITALEdition of BPM Excellence in Practice Series 2008 book by putting EIPD9 as your discount code in the Promo Code Box on checkout. Pay only $35.00.

This book details the case studies of 2007 winners and finalists and provides excellentexamples on how to present your own winning case study.

Rated as the #1 Most Influential Thought Leader in Business Process Management (BPM) by independent research, Nathaniel Palmer is recognized as one of the early originators of BPM, and has led the design for some of the industry’s largest-scale and most complex projects involving investments of $200 Million or more. Today he is the Editor-in-Chief of BPM.com, as well as the Executive Director of the Workflow Management Coalition, as well as VP and CTO of BPM, Inc. Previously he had been the BPM Practice Director of SRA International, and prior to that Director, Business Consulting for Perot Systems Corp, as well as spent over a decade with Delphi Group serving as VP and CTO. He frequently tops the lists of the most recognized names in his field, and was the first individual named as Laureate in Workflow. Nathaniel has authored or co-authored a dozen books on process innovation and business transformation, including “Intelligent BPM” (2013), “How Knowledge Workers Get Things Done” (2012), “Social BPM” (2011), “Mastering the Unpredictable” (2008) which reached #2 on the Amazon.com Best Seller’s List, “Excellence in Practice” (2007), “Encyclopedia of Database Systems” (2007) and “The X-Economy” (2001). He has been featured in numerous media ranging from Fortune to The New York Times to National Public Radio. Nathaniel holds a DISCO Secret Clearance as well as a Position of Trust with in the U.S. federal government.
Tweet