Change strategies are not a new discussion topic, but still they keep people talking about what are the most effective change strategies available and how are they best deployed.  Thurley and Wirdenius identified some key advantages and disadvantages of change management already in 1973, which was summarized by Lockitt and 3T Productions Ltd. (2004) as follows: 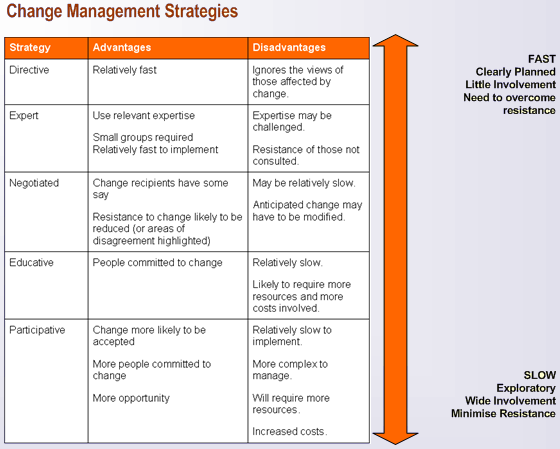 Directive change strategy. This strategy highlights the manager’s right to manage change and the use of authority to impose change with little or no involvement of other people. This approach may lead to valuable information and ideas being missed and there is usually strong resentment from staff when changes are imposed rather than discussed and agreed.

Expert change strategy. This approach sees the management of change as a problem solving process that needs to be resolved by an ‘expert’. This approach is mainly applied to more technical problems and will normally be led by a specialist project team or senior manager. There is likely to be little involvement with those affected by the change.

Negotiated change strategy. This approach highlights the willingness on the part of senior managers to negotiate and bargain in order to effect change. Senior managers must also accept that adjustments and concessions may need to be made in order to implement change. This approach acknowledges that those affected by change have the right to have a say in what changes are made, how they are implemented and the expected outcomes.

Educative change strategy. This approach involves changing people’s values and beliefs in order for them to fully support the changes being made and move toward the development of a shared set of organizational values that individuals are willing, and able to support. A mixture of activities will be used: education, persuasion, training and selection, led by consultants, specialists and in-house experts.

Participative change strategy. This strategy stresses the full involvement of all of those involved, and affected by, the anticipated changes. Although driven by senior managers the process will be less management dominated and driven more by groups or individuals within the organization. The views of all will be taken into account before changes are made. Outside consultants and experts can be used to facilitate the process but they will not make any decisions as to the outcomes.

Which one is the best and how is that change strategy deployed?

Well, you might want to ask yourself, which advantages and disadvantages do you want to have? It is quite clear that in this imperfect world there is no perfect change strategy available. However, the participative change strategy seems quite compelling especially because some of the disadvantages found by Thurley and Wirdenius can be overcome with recent methods such as the CEM Method. The benefits of this approach are that any changes made are more likely to be supported due to the involvement of all those affected, the commitment of individuals and groups within the organization will increase as those individuals and groups feel ownership over the changes being implemented. The organization and individuals also have the opportunity to learn from this experience and will know more about the organization and how it functions, thus increasing their skills, knowledge and effectiveness to the organization.

Get Janne Ohtonen's latest BPM book for free at http://addvalueto.me/download-a-free-process-leadership-book/

Rated as the #1 Most Influential Thought Leader in Business Process Management (BPM) by independent research, Nathaniel Palmer is recognized as one of the early originators of BPM, and has led the design for some of the industry’s largest-scale and most complex projects involving investments of $200 Million or more. Today he is the Editor-in-Chief of BPM.com, as well as the Executive Director of the Workflow Management Coalition, as well as VP and CTO of BPM, Inc. Previously he had been the BPM Practice Director of SRA International, and prior to that Director, Business Consulting for Perot Systems Corp, as well as spent over a decade with Delphi Group serving as VP and CTO. He frequently tops the lists of the most recognized names in his field, and was the first individual named as Laureate in Workflow. Nathaniel has authored or co-authored a dozen books on process innovation and business transformation, including “Intelligent BPM” (2013), “How Knowledge Workers Get Things Done” (2012), “Social BPM” (2011), “Mastering the Unpredictable” (2008) which reached #2 on the Amazon.com Best Seller’s List, “Excellence in Practice” (2007), “Encyclopedia of Database Systems” (2007) and “The X-Economy” (2001). He has been featured in numerous media ranging from Fortune to The New York Times to National Public Radio. Nathaniel holds a DISCO Secret Clearance as well as a Position of Trust with in the U.S. federal government.
Tweet